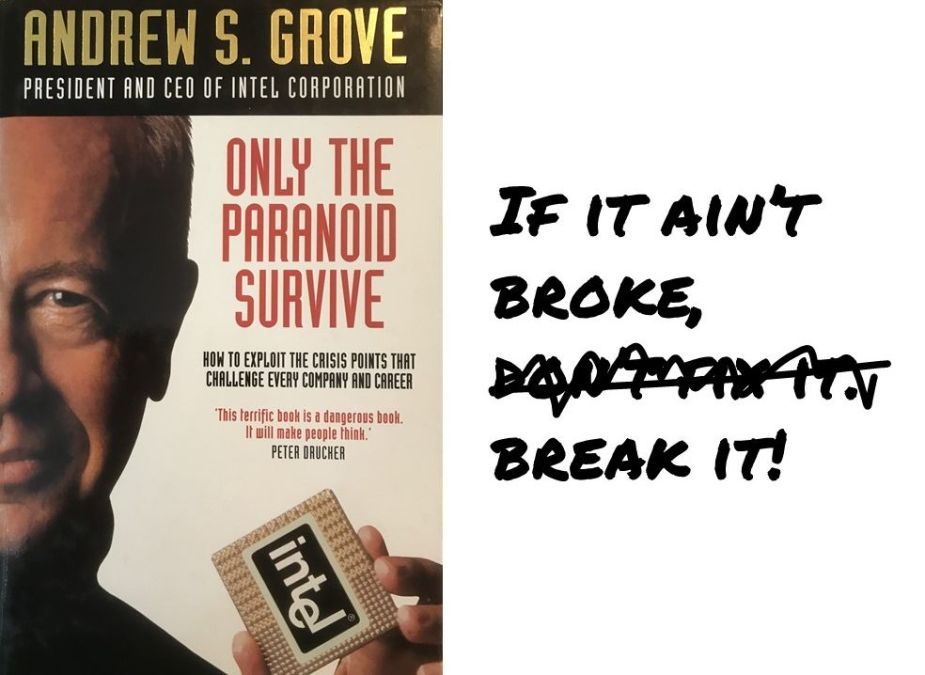 Hard to believe Andy Grove’s book, “Only the Paranoid Survive” was written 25 years ago, now – it still makes so much sense.

Joining Intel in 1968 on the day of its incorporation (he was employee #3, right behind the co-founders) due to his experience and knowledge of semi-conductors, Grove was appointed president in 1979, CEO in 1987 and Chair from 1997, until he retired in 2004.

During his tenure leading the company, Intel went from a manufacturer of memory chips to become the world’s dominant microprocessor company, taking the market capitalisation to $197 (a massive 45x value increase) and the world’s 7th largest company.

He changed management thinking, encouraging open debate with employees, easy access – he had a small cubicle like other employees and is credited by John Doerr as being the “Father of OKRs” (Objectives and Key Results) – a management methodology now credited by Google, amongst others, for much of it’s early success.

The paranoia to which Grove refers is one of refusing to let a company rest on its laurels, but rather to continuously test new products, techniques, sales channel and customers in order to be ready for the inevitable significant changes in the landscape of the business – strategic inflection points (SIPs), as he called them.

Explaining this, Grove said, “A corporation is a living organism; it has to continue to shed its skin. Methods have to change. Focus has to change. Values have to change. The sum total of those changes is transformation.”

He went on to explain that a SIP can mean either the death of a business, when managed wrongly, or ensure that the business emerges stronger than ever, when managed correctly.

The philosophy might date back nearly 50 years but is as pertinent today as ever – particularly in this ever-quicker-changing world.

We all need to be constantly looking at our products and services, our processes and procedures, our customers and our suppliers critically and, far from adopting an “If it ain’t broke, don’t fix it” philosophy, we should be actively looking to re-engineer things, to the extent of making our own products/services obsolete by replacing them with solutions for the changing market – “If it ain’t broke, break it” seems more appropriate.

And, as I have said before, the board needs to be playing an active role in this process – strategy direction, of course, being a key area of board focus.

How paranoid are you and your board, and are you ready for whatever the markets throw at you?

Some of my other recent short posts on success and planning that you might find interesting: